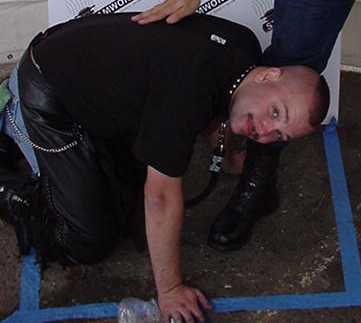 Who me? No one of consequence; but if you insist.

I was born a black child on the Lower East Side of...

No, wait. Let me check my notes.

Oh, yeah! My name is Bootdog (mundane name: Andrew). I'm 30; I live in Oakland, California, and I work in San Francisco as a Lighting Designer. I've been interested in boots longer than I've known I was interested in men. When I was 12 years old, my best friend was a biker for Hallowe'en and managed to score a full set of leathers including engineer boots from his uncle. I was mesmerized by his boots. It took about 6 years after that to figure out what, precisely, was so fascinating. I started polishing my own boots when I began wearing my father's Vietnam era combat boots at 16. I've been bootblacking for other people for over seven years, and the whole hands and knees in a bar thing has gone on since December, 2000.

I'm a full member (and webmaster) of the Alameda County Leather Corps (ACLC) and an associate member of STARS M.C. I've served on the executive boards of both clubs, as well as several committees for each. While the Club system has some definite drawbacks, I feel it provides a much better means of fostering social interaction amongst leatherfolk than the bars ever could.

I keep myself occupied by dancing (and teaching line dances) at Sundance Saloon in San Francisco on Sundays and occasionally at Club 1220 in Walnut Creek on Tuesdays. Yes, that's a lot of dancing.

I went to college at Illinois Wesleyan University, where I got my BFA in Theater Arts. I then realized that a career in theater is incompatible with my "eat regularly, get decent pay, don't change jobs every three months" lifestyle, so I went to graduate school at the Lighting Research Center, part of the Architecture Department of Rensselaer Polytechnic Institute, where I would have gotten my MS in Lighting if I had ever managed to finish my thesis.

I'm currently in a long distance committed, yet open relationship with Patrick, aka Papa, who will hopefully be making a move out to California sometime in the next few years (he's got a few things he needs to get squared away before he can move).

While there are probably a lot of things I could say about myself here, I think things'll go better if I let those facts come out in my writings

Return to the Main Page